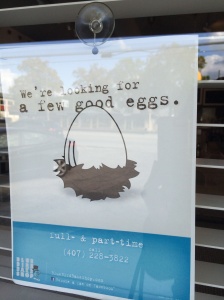 Your people have your back and you have theirs. They are the ones who you can be yourself with, not your role. They love what you love. They get ticked off by the same annoying people you do. They are really good at what they do. They care.

I miss my peeps. My team. My staff. My work family. We were a tight-knit group. I knew I would miss them after I quit work. It’s what made me take a very long time to step away. (The loss of income gave me less pause.) I don’t miss much, but I miss them and how we worked together.

It is the downside of leaving any job and the best aspect of office culture that doesn’t get celebrated enough.

As a department in service to others, we tried not to feed into feelings of “us against them.” But we were different. We were marketing and PR professionals inside a large higher education bureaucracy. No one really got us like we got each other.

These are the people who, with one raised eyebrow, understood exactly what was meant during a strained meeting. We had each other’s backs. We laughed at the same jokes. We were irritated by the same red tape. We sweated the same details and could see the big picture together. We respected each other.

Admittedly, we didn’t know the first thing about pedagogy or curriculum mapping. But we rocked brand standards, media buys, CRMs, SEO and knew that an organic search did not involve a run to Whole Foods.

We knew which stories would generate media buzz and which would be duds.

If you want to see real collaboration, watch a copywriter team up with a graphic designer to tackle a project, shepherded by a traffic coordinator, refined by an art director, championed by a project manager–and then delivered in a few days, on time and under budget. Now watch hundreds of those projects going on all at once. It’s pretty cool.

We knew how to please difficult clients. We knew which battles to fight and which ones to surrender. We knew what everybody wanted from Jimmy John’s.

It’s natural to have silos in big organizations. We weren’t just siloed, heck, we were our own brand–to use marketing lingo. We were the outward-facing, student-championing, common sense-making, award-winning, butt-kicking marketing team. We were very good pros and very good people.

If you are lucky enough to find a core group of solid people at work…your people, recognize it’s a very special thing. If you have the chance to assemble such a team, have the courage to do it. By that I mean lose the dead weight. Bring in the best. Then fight for them. Don’t micromanage them. Expect their best. Get out of their way.

These people, my people, kept me going as long as I did.

One of them sulked for months after I announced I’d be retiring early. He gave me the stink-eye every time he saw me. I was breaking up the team, changing the ingredients of our mojo.

I see them here and there. We go to lunch or drinks. They are my Facebook friends. It’s not the same.

I miss my peeps.

Who are your people at work and why?