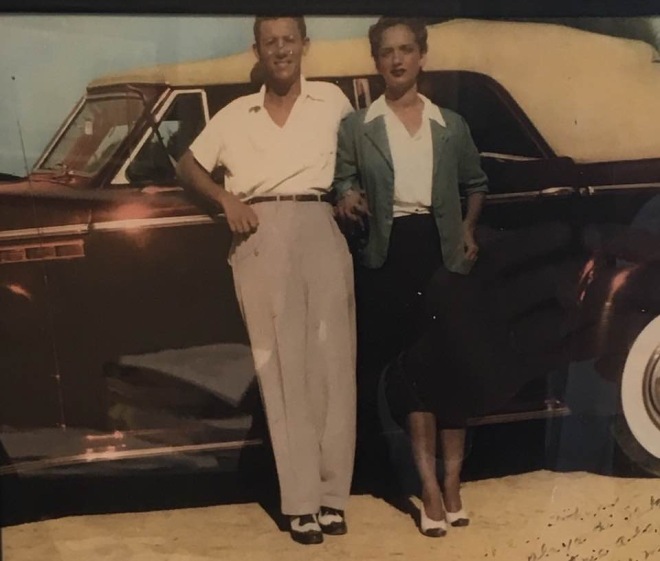 (My parents at Varadero Beach in Cuba in the 1940s, blissfully unaware of the upheaval just ahead.)

My parents were ordinary, middle class people. Not wealthy. Not part of any one percent.

Castro’s death opened wounds I didn’t even know were there. It left me with a wistfulness I share with maybe millions of others. We are the children of the revolution, either looking in from the outside…or looking out from the inside.

We inherited the betrayal of a whole generation. To us, Cuba lived in our parents’ stories. A mysterious, elegant beautiful dream that turned into a nightmare.

For exiles and maybe Cubans living on the island, Castro’s death was supposed to revive that dream somehow, liberate us, begin to restore something sacred that was stolen.

But of course it doesn’t. It can’t. Fidel’s ashes travel across the island in an orchestrated funeral march. But they also float across the Florida Straits, mingling with the dust of so many long abandoned dreams of “next year in Cuba.”

My mom died five years ago. My dad has dementia. I’m exactly the same age as the aging Cuban revolution.

In death as in life, it’s infuriating how many people praise Castro or excuse him. President Obama called him “controversial” as if there’s a way to see tens of thousands of deaths, dehumanizing poverty, stolen property, decimated cities, fractured families and fear as anything but tragic. Oh right, literacy is ostensibly at 98 percent.

American slavery lasted hundreds of years. But no one today thinks slavery had any redeeming qualities or calls it “controversial.” No one praises the free healthcare that slaves received or argues plantation owners “loved” their slaves.

Fidel Castro was really one of the world’s last 19th century-style slave owners. No ships needed. His plantation was an entire island.

It’s easy to imagine how fear, starvation, executions, indoctrination and relentless oppression can make anyone a compliant slave, one that mourns the death of his master.

My parents took the Underground Railroad of the day–a Pan Am flight out in 1959. But many others risked and lost their lives to escape in boats or makeshift rafts…and still do.

It’s why I can’t be a tourist there. It would be like going to a picnic on a Southern plantation in 1830 and marveling at all those happy workers in the fields. “Bless their hearts. Look! They’re singing!” I personally can’t do it.

If you want to go dance salsa and drink a mojito in Havana, go ahead. I can’t yet. Not while Cubans are forbidden to leave. Forbidden to speak out against the system or its leaders.

Not while Cubans are unable to own their own property, monitored everywhere, even in their homes. Unable to sell the products of their own making. Unable to read news from the outside world. Unable to buy milk or meat or toilet paper because it’s rationed, plentiful only for tourists.

Cuba’s economy in 1954 was roughly equal to Italy’s at that time. Today it is half of what it was more than 60 years ago. Think about the repression necessary to keep people that hungry and desperate for more than half a century.

If you go there, have fun. Take pictures of the decay and stagnation and of the Cuban people whose spirit is so difficult to extinguish. But please understand it remains a prison for people who deserve better and have no way out.

I thank my parents that I’m an American.

I thank America that I can share my anti-Trump opinions on Facebook without fear of getting arrested come January.

I thank God my greatest worries are as trivial as they are…as they seemed to be for my parents on that day long ago on Varadero Beach.